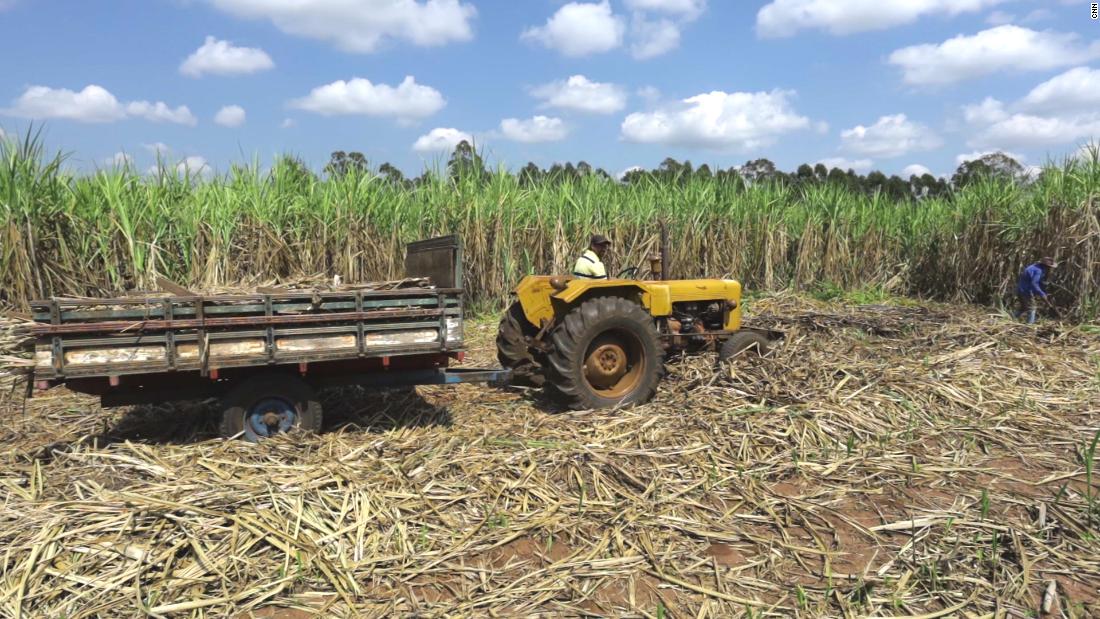 (CNN) — Mexico has tequila. Colombia has aguardiente. Cuba has rum. Brazil’s spirit goes by the name of cachaça, a rum-like liquor steeped in history. Unlike much rum, it is not made from molasses but from fresh sugarcane juice that is fermented and distilled.The spirit was first made by slaves who worked in sugarcane mills in the early 1500s, shortly after the Portuguese introduced cane to the country. Once a staple for low-income workers, the drink initially was known as “pinga” before it became better known by its name cachaça.Now it’s the key ingredient for caipirinhas, and sold abroad for prices comparable to whiskey. “Twenty years ago, we were selling it to people who came to our distillery by horse or carriage,” recalls Pedro Eduardo Valente, who works at the Planalto Farm distillery. It’s has been in his family for generations.”They would carry off five or six jugs. Our cachaça dominated our area. People didn’t want any other brand.”Valente’s ranch is on the outskirts of Brotas, in the state of São Paulo, which is known for its production of cachaça.Although producers of the spirit can be found in most of Brazil now — the last count in 2011 put the number at 40,000 — Pedro is proud of his ranch’s family-owned operation, which he runs with his son Carlos.For the Valente family, it’s all about tradition. Pedro learned the skill of cachaça distilling from his father and has passed it down to Carlos, who in turn hopes his own son will carry on the tradition.A family businessCachaça is a liquor produced from sugarcane in Brazil.ShutterstockLike rum, cachaça has two varieties: unaged, known as “branca” (white) or “prata” (silver), and aged, known as “amarela” (yellow) or “ouro” (gold). The former is usually bottled immediately after distillation and, as a result, tends to be cheaper. The Planalto Farm, however, focuses on the aged variety and has used the same fermentation and distilling process for more than a century. “The tradition of cachaça in the state of São Paulo — I think a lot of it came from our family,” says Carlos. His great-grandfather arrived in Brazil from Italy in 1888, and he was an early producer of cachaça.”We taught a lot of people to make cachaça,” he says. “A lot of people learned from us because at the time there weren’t any distilleries in the region. Ours was the first, we were pioneers.”The cachaça made here is aged from one to five years in large wooden barrels that have been in the family for nine decades.Here’s how to create the perfect caipirinha using cachaca, the Brazilian spirit.The barrels don’t give off any flavor, explains Carlos, because they are so old, and so the spirit is able to rest without its taste being changed. But the barrels do soften the acidity of the cachaça, says Pedro.”For those who like a good cachaça, you have to use aged barrels so they don’t give off the flavor of the wood,” Carlos says.Currently, the Valentes use a homemade bottling machine and make the labels by hand. But they’re bringing the distillery up to date and are waiting on a new labeling machine to arrive. It will print new, redesigned labels that they’ll use to sell their spirit abroad.The label is going to be more modern, says Carlos, “with the history of our cachaça, explaining how it has been made.”Good quality cachaça can be enjoyed neat, but most commonly the spirit is used to make caipirinha cocktails. Sip or mix?Planalto Farm is a family-run business in the state of São Paulo.CNNMade with muddled lime and sugar, crushed ice and cachaça, and served in a short glass, the caipirinha can be found almost all over the world.Carlos, however, likes to stick to tradition. “For the older generations like my father, it’s a sip before lunch, a sip before dinner, to spark your appetite.”No lime, no sugar, not a caipirinha in other words, to savor it. Not to say that it isn’t good in a caipirinha … with our traditional Galician limes, it makes an excellent caipirinha. But the essence of cachaça is to drink it pure.”According to figures from 2015, around 1.8 billion liters were produced in just one year, with 15 million of those exported worldwide. It’s estimated most producers are informal microdistilleries. In 2012, UK drinks group Diageo bought Ypióca, the country’s third largest producer, based in the northeastern state of Ceará, with hopes of taking the spirit worldwide. Exports in 2016 amounted to around 8.7 million liters, compared with Mexico’s 196 million liters of tequila in the same year.Despite Diageo’s ambitions, the drinks export industry remains dominated by beer, and so worldwide consumers may have to wait a little longer for cachaça to become as readily available as tequila.In the meantime, Brazilians will continue to enjoy their country’s staple spirit. It wasn’t always a drink for everyone, but it has gained a lot of popularity in the past 20 years or so, Carlos says.”All Brazilians like cachaça today,” says Carlos. “It has won its place.”