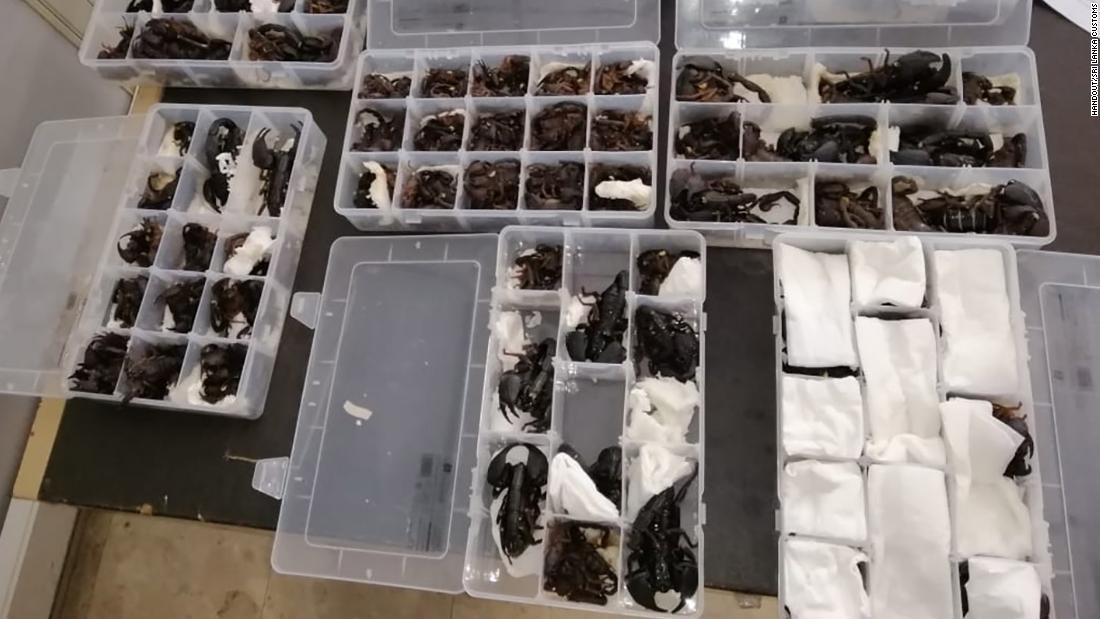 (CNN) — A unnamed Chinese traveler was caught red-handed when he attempted to smuggle 200 live scorpions out of Sri Lanka on Monday.The 30-year-old man was scheduled to fly to Guangzhou in southern China from Colombo’s Bandaranaike International Airport when authorities detected the live scorpions in his checked-in luggage, Sri Lanka Customs spokesman Sunil Jayarathna told CNN.Photos provided by Sri Lankan Customs show the scorpions packed inside at least seven plastic boxes.”These scorpions were collected from several areas in Sri Lanka,” Jayarathna said. “While the venomous scorpions are not deadly, they are protected.”Sri Lanka Customs said the live scorpions, which cannot be taken out of the country, were concealed in the man’s baggage.Sri Lanka CustomsJayarathna added that authorities released the man after he paid a fine of 100,000 Sri Lankan rupees (US$552). Authorities are continuing to investigate the incident.Scorpions are used in Traditional Chinese Medicine in herbal formulas that practitioners claim can help relieve pain in muscles and nerves, according to a notice from the Hong Kong Department of Health.Sri Lanka is a tropical island nation home to a diverse range of wildlife, and this is not the first time that air travelers have been caught trying to smuggle live animals out of the country.In 2014, a Chinese man was arrested in Colombo while attempting to smuggle swallow nests worth $50,000, according to CNN affiliate CNN News 18.

Eastern Airlines returns to the sky

South Korea may be open to solo travel to North Korea